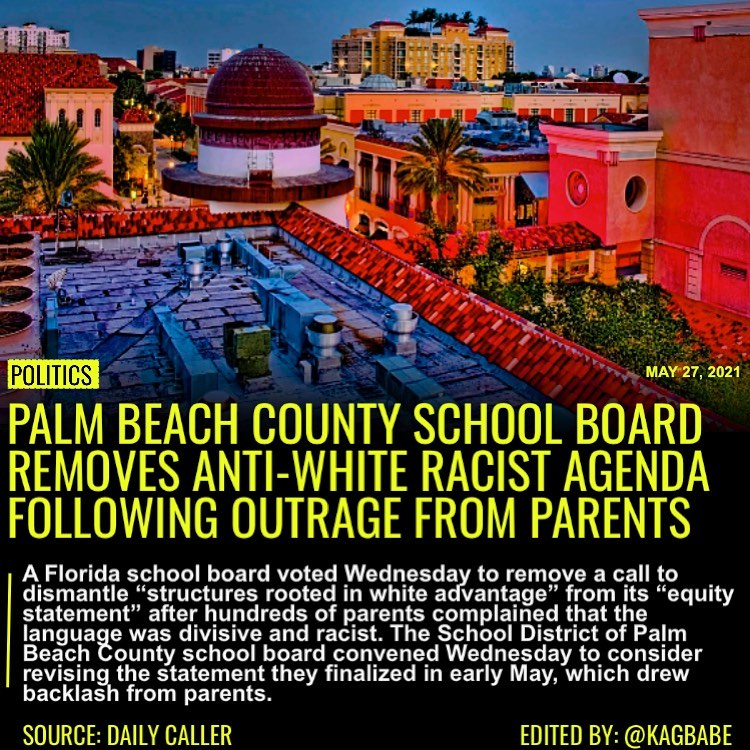 A Florida school board voted Wednesday to remove a call to dismantle “structures rooted in white advantage” from its “equity statement” after hundreds of parents complained that the language was divisive and racist, The Palm Beach Post reported.

The School District of Palm Beach County’s school board convened Wednesday to consider revising the statement they finalized in early May, which drew backlash from parents. They voted 4-3 to change the statement, according to The Palm Beach Post.

“The School District of Palm Beach County is committed to dismantling racism and other systems of oppression and inequity. We will create equitable and inclusive schools that ensure students have what they need to be successful in school and life,” the statement read, in part.

Board member Karen Brill made the suggestion a week earlier that the phrase be removed because it became “evident” that it was not helpful, but “harmful,” noting the outpouring of complaints from parents.

The board also voted to replace the word “redistributing” in the statement that was updated to say the school is committed to “distributing resources to provide equitable outcomes,” according to The Palm Beach Post.

During the Wednesday meeting, 70 parents and community leaders were split over the proposal to eliminate the phrase. Some of the parents who were in the opposition condemned the phrasing for its political implications.

“You mention dismantling white advantage, which is an opinion,” Amanda Silvestri, a district parent, previously told the board. “None of this despicable, political, racist nonsense should be pushed on innocent children and has absolutely no business being taught in schools.”

Cindy Eldred, another parent, rejected the notion that her children should feel guilty for their skin color.

“My children will never be taught to be ashamed of or apologize for who they are because of their skin color,” she said at Wednesday’s meeting, according to The Palm Beach Post.

Speakers at the meeting expressed that the phrase indicated that the school was trying to implement Marxist ideas or critical race theory (CRT) into classrooms.
⬇️

DO NOT open those things! Haven’t you learned anything?!? 2020 doesn’t need any

If marker 1 is complete, it needs to be confirmed Once confirmed?