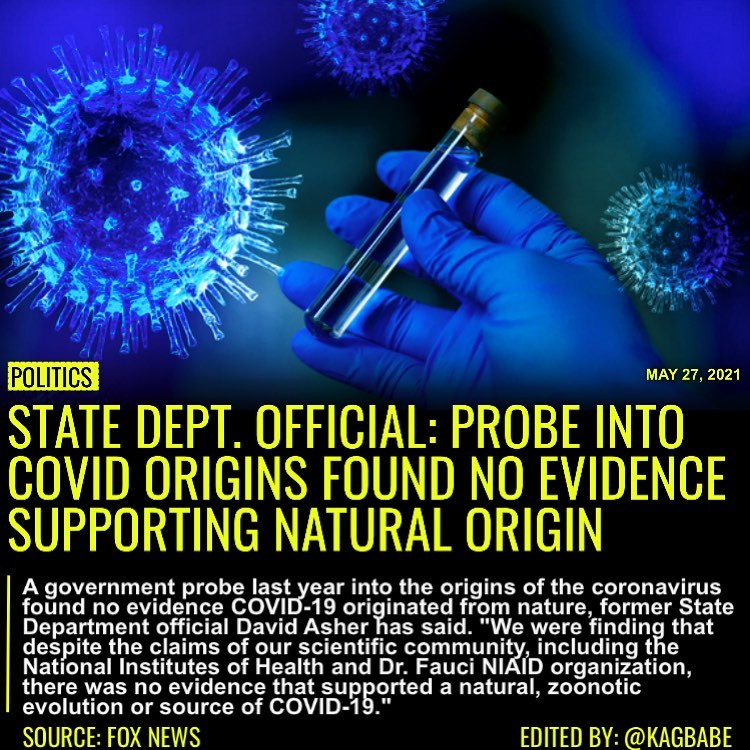 “We were finding that despite the claims of our scientific community, including the National Institutes of Health and Dr. Fauci’s NIAID organization, there was no evidence that supported a natural, zoonotic evolution or source of COVID-19,” he told “America Reports.”

The probe was led out of the State Department’s arms control and verification (AVC) bureau and initially launched at the request of former Trump Secretary of State Mike Pompeo before ending this year.

Asher, the lead contractor on the subject, said the team investigated the two chief hypotheses for the virus’ origins, the other being the lab-leak theory that has gained credence after widespread media dismissal over the past year.

“The data disproportionately stacked up as we investigated that it was coming out of a lab or some supernatural source,” he said.

Asher was critical Thursday of former Assistant Secretary of State Chris Ford, who expressed reservations about the investigation’s findings and cautioned against the lab theory. Ford told Fox News that the AVC probe had been kept secret from him and bypassed department and intelligence community biological experts, although adding the lab origin theory was “very possible.”

The Wuhan Institute of Virology has become a central focus of investigators looking into the virus’ origins, in part due to its known research on bat coronaviruses.

“That was the epicenter of synthetic biology in the People’s Republic of China, and they were up to some very hairy stuff with synthetic biology and so-called gain-of-function techniques,” Asher said, later saying the odds of natural origin were extremely long.

“To say this came out of a zoonotic situation, it’s ridiculous,” he said.

We are witnessing with our own two eyes, the 𝐁𝐈𝐆𝐆𝐄𝐒𝐓 𝐩𝐬𝐲𝐨𝐩 in U.S. history !!!!