A strange and macabre monument are located in Elber country (USA) called ” the guiding stones of Georgia” these are 6 gigantic rectangles of granite stone with 8 different languages written in modern designs containing the oath of the new world order. This is where you ask yourself: who dares call this a conspiracy!? .
The monument is astronomically oriented, following the traditional hermetic and occult pattern, the hole seen in the Stone of the Center was drilled so that you can always see the Polar Star, which indicates the terrestrial North. Two messages are recorded on the Stones; One of them is located in the upper dome of the monument, engraved in 4 ancient scriptures: Babylonian cuneiform script, to the north; Classical Greek, to the east; Sanskrit to the south, and Egyptian hieroglyphics to the west. The message reads: “Let these be Guiding Stones to an Age of Reason.” The total content of the message bears a striking resemblance to the so-called Charter of the Earth (the new 10 uncommandments of the UN) cynically and blaspheming the 10 commandments given by YHWH the ETERNAL to Moses on Mount Sinai described in the book of Exodus. An example of some of the “new commandments” are: .
1. Keep humanity below 500,000,000 in perpetual balance with Nature.
2. Wisely guide reproduction, improving fitness and diversity.
3. Unite humanity with a new living language.
4. Rule passion, faith, tradition and all things with a tempered reason.
9. Reward truth, beauty and love, seeking Harmony with infinity.
10. Not be a cancer to the earth. Leaving space for Nature .
Alert!: This is a clear apology to the dementia and perversity of the elite that governs this world because it propels an era of genocide and other aberrations always going against the creator and his laws. 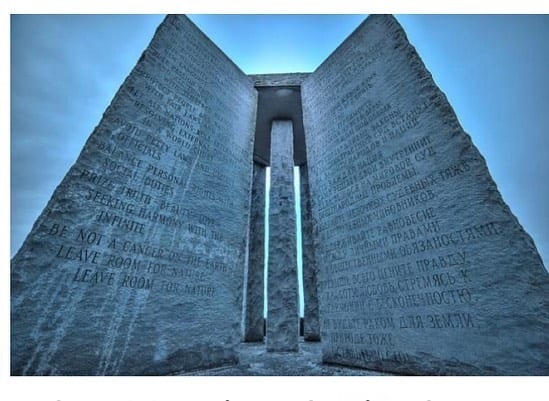