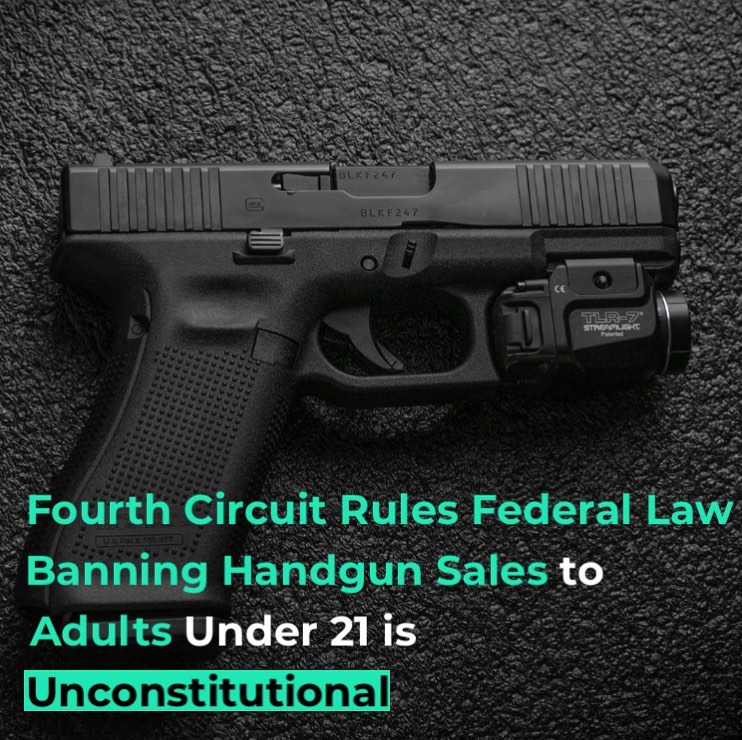 A three-judge panel of the Fourth Circuit Court of Appeals issued a ruling today finding that denying full Second Amendment rights to Americans aged 18 to 20 years old is patently unconstitutional.

As Judge Julius Richardson wrote for the three-judge panel . . .

Plaintiffs seek an injunction and a declaratory judgment that several federal laws and regulations that prevent federally licensed gun dealers from selling handguns to any 18-, 19-, or 20-year-old violate the Second Amendment. We first find that 18-year-olds possess Second Amendment rights. They enjoy almost every other constitutional right, and they were required at the time of the Founding to serve in the militia and furnish their own weapons. We then ask, as our precedent requires, whether the government has met its burden to justify its infringement of those rights under the appropriate level of scrutiny. To justify this restriction, Congress used disproportionate crime rates to craft overinclusive laws that restrict the rights of overwhelmingly law-abiding citizens. And in doing so, Congress focused on purchases from licensed dealers without establishing those dealers as the source of the guns 18- to 20-year-olds use to commit crimes. So we hold that the challenged federal laws and regulations are unconstitutional under the Second Amendment. Despite the weighty interest in reducing crime and violence, we refuse to relegate either the Second Amendment or 18- to 20-year-olds to a second-class status. (emphasis added).

Richardson is a Trump appointee. He was joined in the decision by Judge G. Steven Agee (a George W. Bush appointee). Judge James A. Wynn (a Clinton appointee) dissented.

Dumbest person alive. First of all what shes suggesting is illegal. Second of al

Here we go! Our Republic is on the line. This is what the media doesn’t want yo

….Please remember who got it done!!!