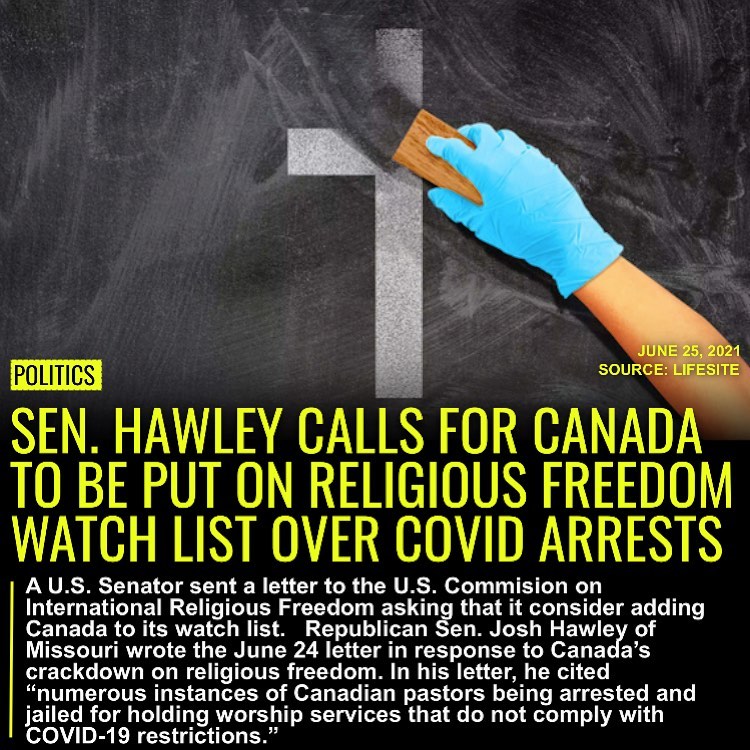 A U.S. Senator sent a letter to the U.S. Commision on International Religious Freedom asking that it consider adding Canada to its watch list.

Republican Sen. Josh Hawley of Missouri wrote the June 24 letter in response to Canada’s crackdown on religious freedom. In his letter, he cited “numerous instances of Canadian pastors being arrested and jailed for holding worship services that do not comply with COVID-19 restrictions.”

“I am troubled that our Canadian neighbors are effectively being forced to gather in secret, undisclosed locations to exercise their basic freedom to worship,” Hawley wrote. “Frankly, I would expect this sort of religious crackdown in Communist China, not in a prominent Western nation like Canada.”

“Canadian authorities’ arrest of faith leaders and seizure of church property, among other enforcement actions, appear to constitute systematic, ongoing, and egregious violations of religious freedom.”

Hawley was particularly moved by the June 15 arrest of Pastor Tim Stephens, whose children wept and clung to his hand after he was hauled into a police car. The evangelical minister was arrested for holding a prayer service outdoors, a gathering the police needed a helicopter to find. Although outdoor transmission of COVID-19 is very rare, the service violated Alberta’s COVID-19 restrictions.

Regarding her husband’s arrest, Raquel Stephens tweeted that the family’s faith remains firm.

“We are shaken, but our faith is not,” she wrote.

“We are sorrowful, but always rejoicing. As I prayed with the saints tonight, I couldn’t help but sense their joy at this opportunity to proclaim the excellencies of our Lord Jesus. In God’s providence, Tim’s imprisonment will strengthen us in the faith and embolden us to love and obey Christ, no matter the cost.”

Hawley also cited the arrest of Pastor James Coates of GraceLife Church in Spruce Grove, near Edmonton, Alberta, and the bizarre police blockade of the place of worship, which has led to protests and the community attending underground services.

The senator sent a copy of the letter to Canada’s Ambassador to the United States, Kirsten Hillman.

@Pidguen I totally reject Ayyes fren lol and agree with you. I just think they a

@mfrenderson I actually love that