The evidence was overwhelming.

Investigators had a list, exclusively viewed by the Associated Press, of 629 girls and women from across Pakistan who since 2018 had been allegedly trafficked to China and forced to marry Chinese men. Once there, many victims were isolated and physically and sexually abused. Others, investigators found, were forced into prostitution.

The exploitation was lucrative for the Chinese and Pakistanis involved. Less so for the impoverished families from Pakistan’s marginalized Christian community that the trafficking rings reportedly targeted, assuming they would be vulnerable and powerless to stop it.

In June, Pakistani investigators started to prepare the case, which the AP has extensively reported on. There was real momentum to stop the alleged trafficking to China, where there’s big demand for brides from abroad, as males far outnumber females because of the previous one-child policy and prevalence of female infanticide.

Then came the pressure from above: Shut it down

Cash-strapped Pakistan relies on China for aid, trade and military assistance. In 2015, China launched the China-Pakistan Economic Corridor (CPEC), a $75 billion project to fund the construction of roads, power plants and other infrastructure and development initiatives. It’s part of China’s broader vision of rejuvenating the Silk Road and China’s ties to the rest of Asia through what it calls the Belt and Road initiative.

The assistance, like any aid, comes with conditions both explicit and implied. In October, according to the AP’s investigation, that meant that a court in Faisalabad acquitted 31 Chinese citizens charged with human trafficking. What was the largest case against the alleged trafficking ring had swiftly fallen apart: Pakistani media curbed its coverage, while several women originally set to testify suddenly refused “because they were either threatened or bribed into silence, according to a court official and a police investigator familiar with the case,” the AP reported.

Why? Pakistani officials were afraid that pursuing the case would anger China and threaten its lucrative investments and economic cooperation, officials and activists interviewed by the AP found.

“No one is doing anything to help these girls,” one senior official, speaking on the condition of anonymity out of fear of reprisal, told the AP. “The whole racket is continuing, and it is growing. Why? Because they know they can get away with it. The authorities won’t follow through, everyone is being pressured to not investigate. Trafficking is increasing now.”

He said he had decided to come forward “because I have to live with myself. Where is our humanity?”

Saleem Iqbal, a Christian activist involved with helping the victims and families, said that some officials from Pakistan’s Federal Investigation Agency had been “transferred” and put under “immense pressure” by the government to halt their work on the case.

“When we talk to Pakistani rulers, they don’t pay any attention,” he told the AP.

Both Pakistani and Chinese officials have denied the allegations.

The New York-based human rights group has recorded cases of women from northern Myanmar being trafficked to China, where they are sold for $3,000 to $13,000 dollars. Other news reports have documented how thousands of women and girls from Cambodia, North Korea, Laos and Vietnam have also been sold into exploitation in China.

“Mum — they don’t give me a penny. They just keep me in the house. Maybe things will change when I give them a baby,” a woman from rural Cambodia messaged her mother after being lured to China on the false hope of work and wealth, the Reuters news wire reported.

“If you are trafficked, of course you will be raped. Probably everyone was raped,” she said. “I became a wife there [in China]. At that house, I had to obey everything they said or else I would be beaten. They beat me without fear because I am not Chinese.”

Thousands of women and girls from North Korea, some as young as 12, have been forced into marriages and prostitution, and subjected to other brutal abuse in China, in what the London-based Korea Future Initiative says is a multibillion-dollar industry there. Women and teenagers looking to flee the repressive state are a particular target.

Regionwide, traffickers prey on victims from impoverished, marginalized and minority communities, who usually have little information on what really lies ahead when a trafficker, middleman or even family member or acquaintance in on the scheme comes knocking and offers work or a new beginning abroad.

The number of single men China who in part drive these illegal networks is only growing. As The Washington Post’s Simon Denyer and Annie Gowen reported in 2018: “Out of China’s population of 1.4 billion, there are nearly 34 million more males than females — the equivalent of almost the entire population of California, or Poland, who will never find wives and only rarely have sex. China’s official one-child policy, in effect from 1979 to 2015, was a huge factor in creating this imbalance, as millions of couples were determined that their child should be a son.”

But because the victims are often from marginalized communities within their home countries, the phenomenon of bride trafficking isn’t an issue leaders are keen to discuss as part of their bilateral relationship with China, said Heather Barr, the acting co-director of Human Rights Watch’s women’s rights division.

“There’s no country in Asia that has a symmetrical relationship with China,” Barr said. “The scale of influence and economic and political power is just so different between China and other countries in the region, and particularly the countries that are, so far, on the list of where trafficked brides are coming from.”

Now with China’s Belt and Road initiative, these countries “are more indebted, often literally, to China,” she said, adding, “It’s so increasingly clear that this is an issue across the whole region.”

Bill Gates had a closer relationship with Jeffrey Epstein than he admitted, The New York Times reports 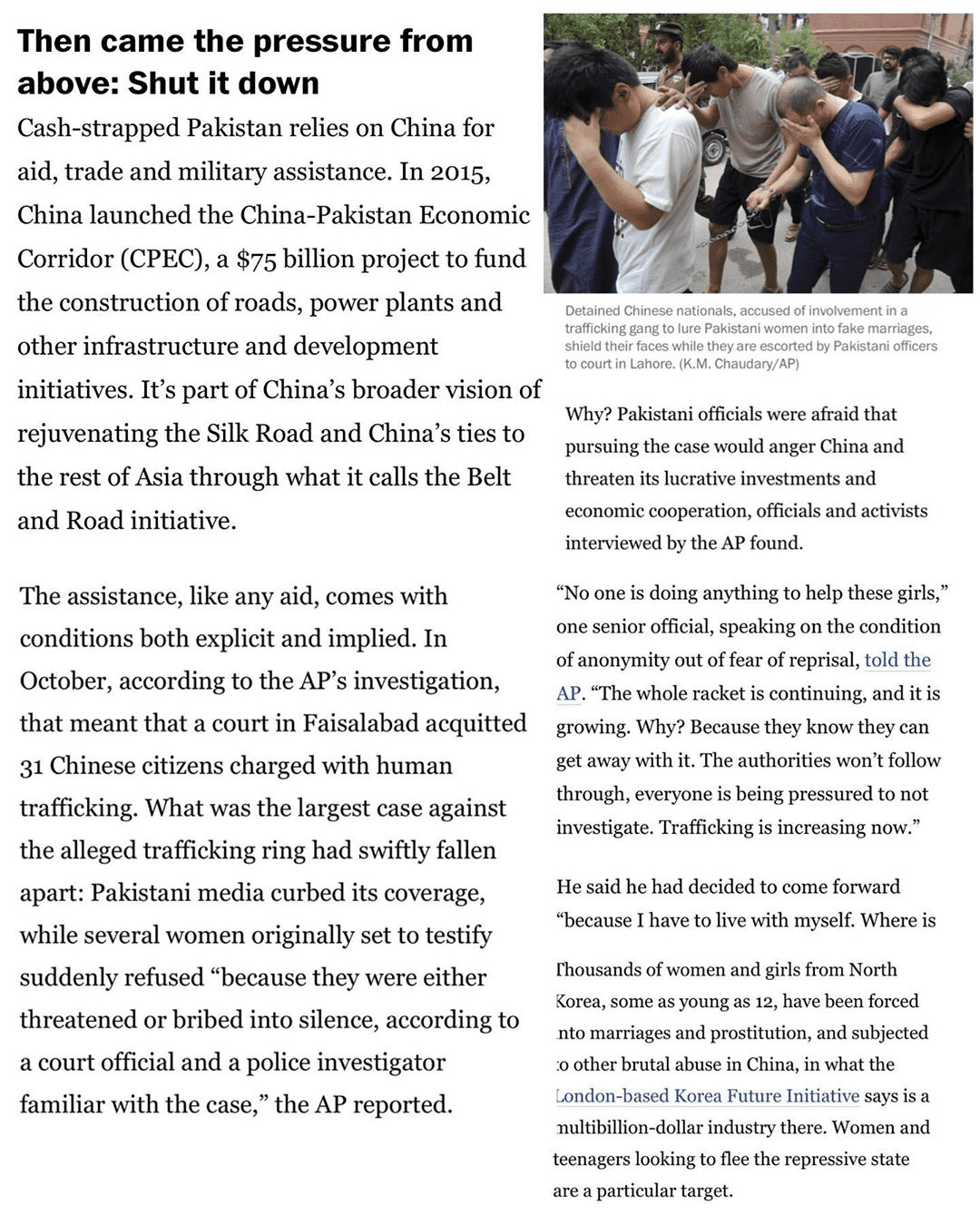