The former US President is seen smiling on the steps of the plane – dubbed the Lolita Express – next to Maxwell, in astonishing pictures exclusively obtained by The Sun.

In another image he has his arm round Epstein’s personal masseuse and sex slave Chauntae Davies – who had been ordered to wear a ‘pilot’ shirt to look professional.

Other never-seen-before images show Clinton traveling on the infamous Boeing 727 jet while playing cards and chomping on a cigar.

Now, for the first time, Chauntae Davies has revealed the extraordinary details of Clinton’s long distance flight to Africa with Maxwell and a number of other celebrities.

There is no suggestion Clinton, Spacey, 60, or Tucker, 48, did anything wrong during the tour, or knew of Maxwell’s alleged activities on Epstein’s behalf, or the abuse Chauntae suffered at his hands.

However, it will further raise concerns about how some of the world’s most famous and powerful people were drawn into Epstein’s circle at a time when he was committing horrific sex crimes.

Chauntae, now 40, told The Sun: “It’s clear that Epstein was using this private jet and his wealth to get close to rich and powerful people.

“Looking back at these images now it raises a lot of questions about why Bill Clinton was using the plane and what perhaps Jeffrey may have been trying to accomplish by having him around.”

Sex trafficker Epstein – who killed himself in his jail cell in August – was accused of using the aircraft to transport underage girls to his various luxury homes around the world.

No evidence has emerged to prove that Andrew or Bill Clinton took part in sexual activity on the Lolita Express.

But Chauntae, who suffered a series of rapes and sexual assaults at the hands of disgraced Wall Street tycoon Epstein, opened up about the September 2002 Africa trip for the first time.

It was part of a project for Clinton’s foundation, in order to raise awareness about poverty and the AIDS crisis.

But it also saw pedophile Epstein and his alleged pimp Maxwell – who has always vehemently denied any wrongdoing – rubbing shoulders with America’s former commander-in-chief and other A-list celebs.

Clinton was a perfect gentleman on the flight

Chauntae, then aged 22, categorically denied that any improper behavior occurred around Clinton and that he was a “complete gentleman” the entire time.

The former president also previously issued a statement in regards to his travels on the plane and denied knowing anything about the financier’s crimes.

It said: “President Clinton knows nothing about the terrible crimes Jeffrey Epstein plead guilty to in Florida some years ago, or those with which he has previously been charged in New York.”

“In 2002 and 2003, President Clinton took a total of four trips on Jeffrey Epstein’s airplane: one to Europe, one to Asia, and two to Africa, which included stops in connection with the Clinton Foundation.

“Staff, supporters of the Foundation, and his Secret Service detail traveled on every leg or every trip.”

Chauntae has never accused Andrew of any wrongdoing and Andrew himself has always denied any impropriety.

Speaking on his behalf, Buckingham Palace said: “The Duke of York has been appalled by the recent reports of Jeffrey Epstein’s alleged crimes.”

Describing how she found herself on the once-in-a-lifetime trip, Chauntae revealed how she received a call from Epstein’s office asking if she would come on a trip he was hosting. He gave her just a week’s notice to prepare.

She said: “That was all I was told, just a simple yes or no and can I leave in a week?

“Meaning, get all necessary shots, reschedule any existing appointments, pack a suitcase and meet us in New York to fly to Africa.

“It did weigh heavy on my mind the remoteness of being on the other side of the world with Jeffrey, not knowing what to expect from him.

“I was praying Jeffrey wouldn’t make a move on me, desperately wanting everything about this trip to be kept professional.”

Massage therapist Chauntae – who was allegedly raped and sexually assaulted by Epstein on other trips, including at his private Caribbean island of Little St James – was terrified of the American.

We were told to wear pilots outfits

At the time of the Africa trip she had recently broken her finger and recalls that Ghislaine Maxwell – who had first recruited her into Epstein’s inner circle – was unsure if she should travel.

Chauntae said: “Ghislaine, after first convincing me I didn’t want to miss out on this opportunity when I initially hesitated, had doubts I could help carry things and prepare food.

“I took a commercial flight from LA to New York and then walked from that plane to Jeffrey’s plane sitting in the middle of the tarmac.

“A man ushered me over and I boarded to find Sarah Kellen and two other assistants, waiting for Jeffrey and Ghislaine’s arrival, along with whoever they were hosting.

“I was curious to see who my travel companions would be. I hoped we got along. The man handed me a packet and suggested I look through it and become familiar with the itinerary.

“He gave us uniformed shirts to wear, white button downs with captain shoulder patches. I felt like a goober but I was a good sport and put it on.

“We were given a briefing on the food that was available on the plane and our flight schedule, but then we took a seat.”

Chauntae then told how she was shocked and surprised to see the A-list guests arrive, including ex-Prez Clinton.

She said: “I jumped out of my seat and was immediately aware that my travel mates had arrived. And in walks Bill Clinton.

“He continued to walk onto the plane, introducing himself. I thought him to be charming and sweet.

“More of the guests arrived, and somehow, as the plane closed its doors, I stood looking around the room at all the new faces I just met.

“I literally pinched myself to make sure I was alive and the pain meds for my finger weren’t causing me to hallucinate.

“I was going to Africa with the most eclectic group of people imaginable.”

Our pictures also show Kevin Spacey alongside Maxwell and a smiling Chris Tucker.

Chauntae revealed that after everyone was formally introduced the plane took off from a New York airfield and everyone quickly began bonding.

She said: “It was like I was at camp with the most unimaginable group of campers one could put together.

“Everybody cracked jokes at one another. Clinton was chiming in cracking jokes along with us, and we were all laughing and bonding over corny jokes.

“A movie was put on, everyone took either a seat in the giant armchairs or on the floor, and watched it all together. Eventually, everyone fell asleep to the movie.”

On the Ghana leg of the trip, Chauntae revealed she went shopping at a small wooden jewellery store and helped the former President pick out a bracelet for his daughter Chelsea.

She said: “He and I were bonding over the fact that my great uncle, Russel Cronkhite was the head chef for the Blair House, the guest house of the White House, during his Presidency.

“He was the chef that made Chelsea’s infamous pizzas for her thirteenth birthday party.

“Clinton was a great guy on the trip. He’d sit around on the plane with a cigar in his mouth, playing cards between flights.

“I wrote in my journal at the time that I wished he could be president again. He was charismatic and funny and kind and personable.

“It was obvious he cared about not just our country but the world. He was a gracious host.”

Following the final leg of the trip in South Africa, Epstein’s plane departed for London and Clinton and the other celebrities left.

Chauntae and a smaller group of people flew to Paris with Epstein.

Weeks ago, we were all going to die from world war 3 because Trump killed Soleimani

For people who don’t understand my motives, ensuring and protecting online free speech…

Just so we are clear, Flynn also used secret twitter accounts. This is nothing new. 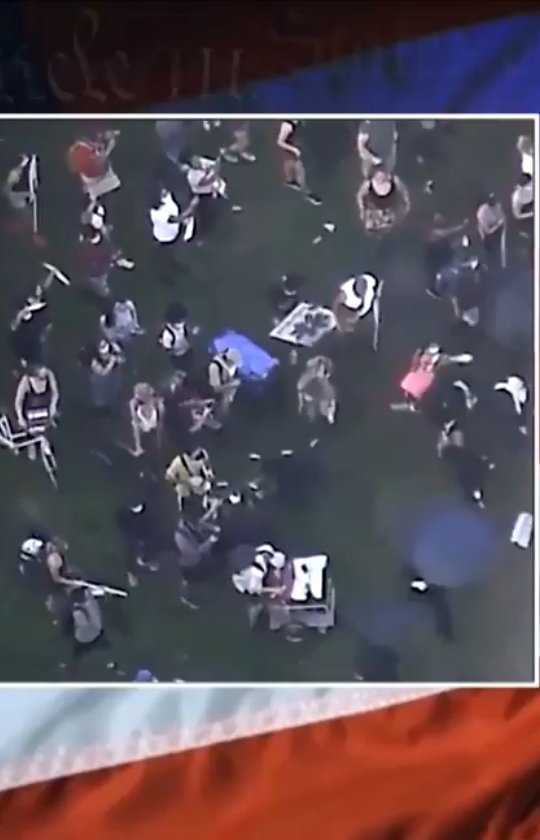