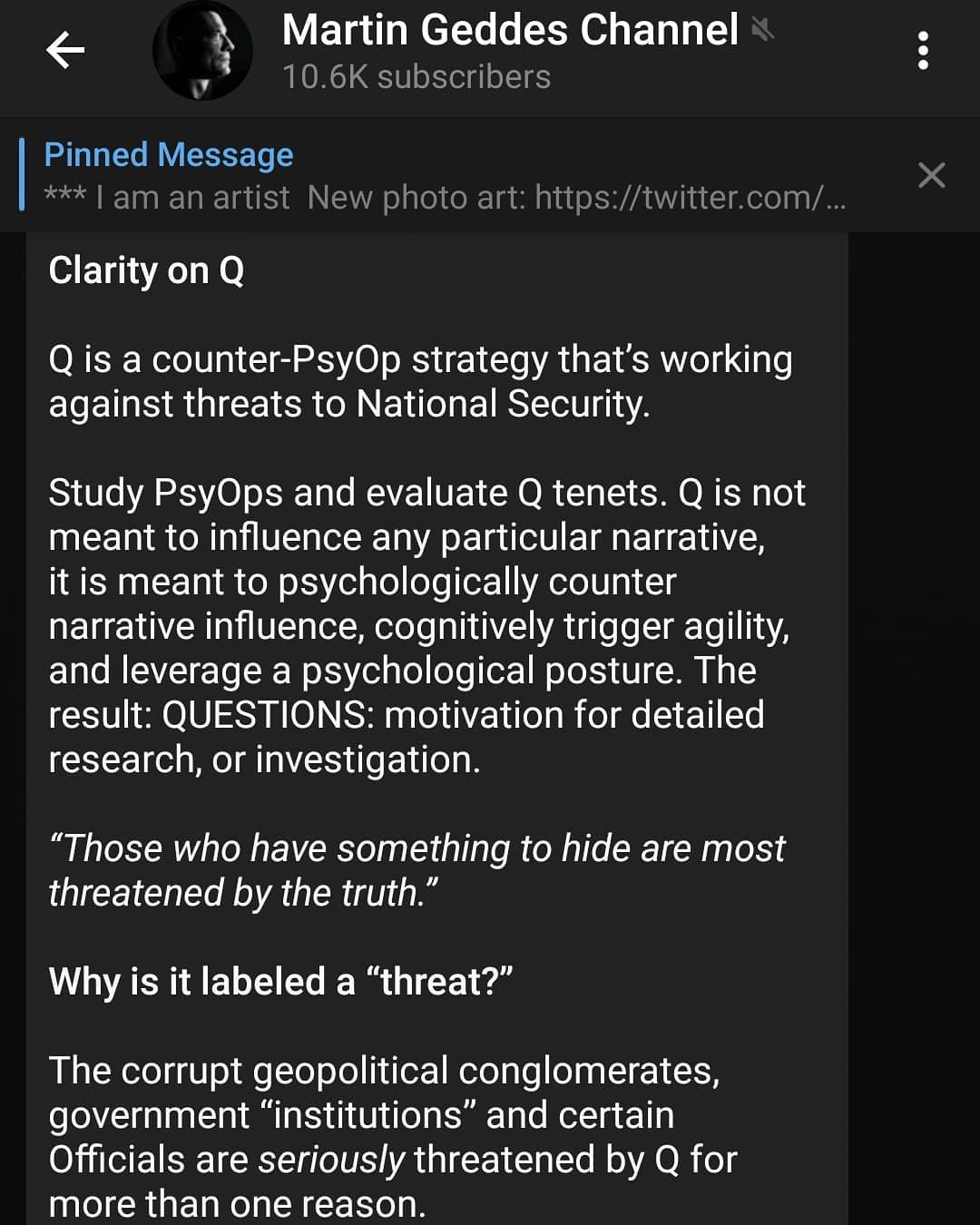 Breaking “Spells,” what I call

The Media’s grip on Americans Minds.
Psychological/Spiritual Warfare
Thought this was a great analysis 👍

Q is a counter-PsyOp strategy that’s working
against threats to National Security.

Study PsyOps and evaluate Q tenets. Q is not
meant to influence any particular narrative,
it is meant to psychologically counter
narrative influence, cognitively trigger agility,
and leverage a psychological posture. The
result: QUESTIONS: motivation for detailed
research, or investigation.

“Those who have something to hide are most
threatened by the truth.”

Why is it labeled a “threat?”

The corrupt geopolitical conglomerates,
government “institutions” and certain
Officials are seriously threatened by Q for
more than one reason.

1 . It is subverting their Narrative Warfare
strategy and objectives in multiple ways

2. It is helping millions of normal people
(Patriots) as well as those Patriots in
Government, the IC, US Military, Fed law
enforcement, and critical Industry positions
do a really important thing: Identify traitors
and corruption from within America and
internationally.

Not all officials, government institutions or
major corporations are threatened by Q.

In fact, not all IC officials, Intelligence
professionals, career Military professionals
or federal law enforcement professionals are
threatened by Q either.

The efficacy of Q:

Countering corrupt narrative warfare
influence against YOU, by causing you to
stop, question & think, and giving you a
reason to investigate.

The People need a reason to question the
control of corrupt and deceitful authority.

A strange digital phenomenon/ anomaly
makes people ask themselves lots of
questions and is worth investigating.

Creating a reason for you to justify opting
for online research over that TV show you’re
hooked on and binge watching after a long
day at work ->which inevitably led to startling
discoveries and uncanny connections ->
connections which opposed a strongly
established narrative you believed was true
– your mind essentially went, WTF is this!?
GTFO! <or maybe you’re a cool guy and
thought, “interesting, must know more”> but
either way, you became motivated to find out,
to learn and investigate further.

So much so, that thousands became OSINT
experts to investigate facts and determine
the truth based on extensive research that
was not “Google” approved.

Deep research ultimately leads you to
different historical and more-accurate
information (normally buried by Tech
oligarchy or purposefully not taught/
discussed in globally funded academic
institutions intended to educate the masses)
you learn to filter for factual information over
Big Tech A1 “recommended” information, and
attain a higher level of self-education.

This practice is of self-education in the
Information Age, when a goldmine of
knowledge exists online if you care enough
to learn, and decide to filter information
differently than Big Tech A1 traditionally does
FOR you,
will ultimately increase your knowledge,
awareness and sense of judgement on the
reality of the status quo.

This improves decision-making faculties
regarding true-false- ambiguous information,
ie: the meaning of many things (ideas,
politics, people, laws, events etc) based
on your own judgement – and not that of
traditional “authorities” like Facebook,
Google, Government Officials or other
“Leaders.”

This is the mass-scale publishing of biased
meanings regarding facts on huge platforms,
publications, news sources, establishing
media “authority” – all for the purpose
of perpetuating group-think and forced
normalization of psychological beliefs to
support their ideas – which actually strip
freedom, power and finances away from you.

Q is not the enemy here folks, not by a long
shot.

AG Barr sees no reason to appoint a special counsel for Hunter Biden….

History tends to repeat itself