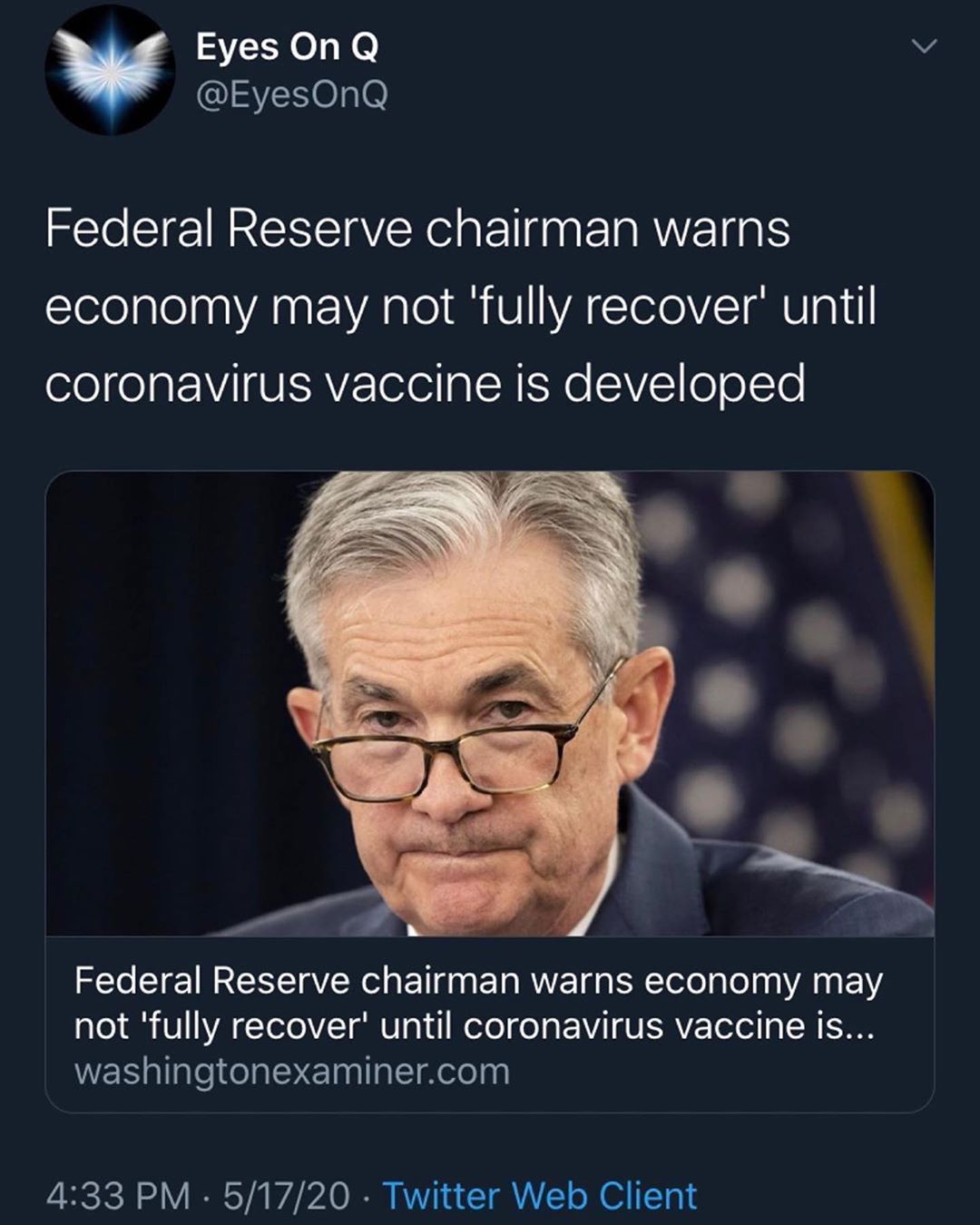 Federal Reserve chairman Jerome Powell warned in an interview released on Sunday that a full economic rebound following the coronavirus pandemic may not occur until the end of 2021.

Powell described the sudden slowdown as the “biggest shock that the economy’s had in living memory” during the interview on CBS’s 60 Minutes.

“This economy will recover; it may take a while,” Powell said. “It may take a period of time, it could stretch through the end of next year, we really don’t know.”

Powell also said that a full economic recovery may depend on the availability of a coronavirus vaccine.

“Assuming that there’s not a second wave of the coronavirus, I think you’ll see the economy recover steadily through the second half of this year,” he said. “For the economy to fully recover, people will have to be fully confident, and that may have to await the arrival of a vaccine.”

Due to mass business closures across much of the country, about 36 million workers have filed for unemployment since the start of the pandemic, or about 20 percent of the workforce. The unemployment rate stands at 14.7 percent as of April, but Powell warned it could rise to 20 or even 25 percent, and predicted “a couple more months” of job losses. Powell said policmymakers and lawmakers should attempt to prevent a situation in which Americans begin losing their homes.

“It may well be that the Fed has to do more,” Powell said. “It may be that Congress has to do more. And the reason we’ve got to do more is to avoid longer-run damage to the economy.”

The coronavirus has infected almost 1,500,000 and killed almost 90,000 in the U.S. as of Monday. Daily rates of new cases have been steadily declining in areas that already saw a wave of infections, most notably the New York City metropolitan area. States including Georgia and Florida have been reopening businesses with limitations on the number of customers allowed in a given space, while some regions of New York State are moving toward reopening.

Accountability under the law for all! . • US POST OFFICE FOUND “IHREE TUBS” OF ABSENTEE BALLOTS FOR WISCONSIN ELECTION I…

Exposing themselves, the plan they had for us should terrify you. In trying to bring Trump down and project their intent…

Search ‘voter’ or ‘fraud’ in the bio link to see the most recent cases of voter fraud many states. . • President Trump S…

Those that refuse contact tracers and/or testing, will not be allowed to leave their homes or purchase groceries and/or prescriptions.