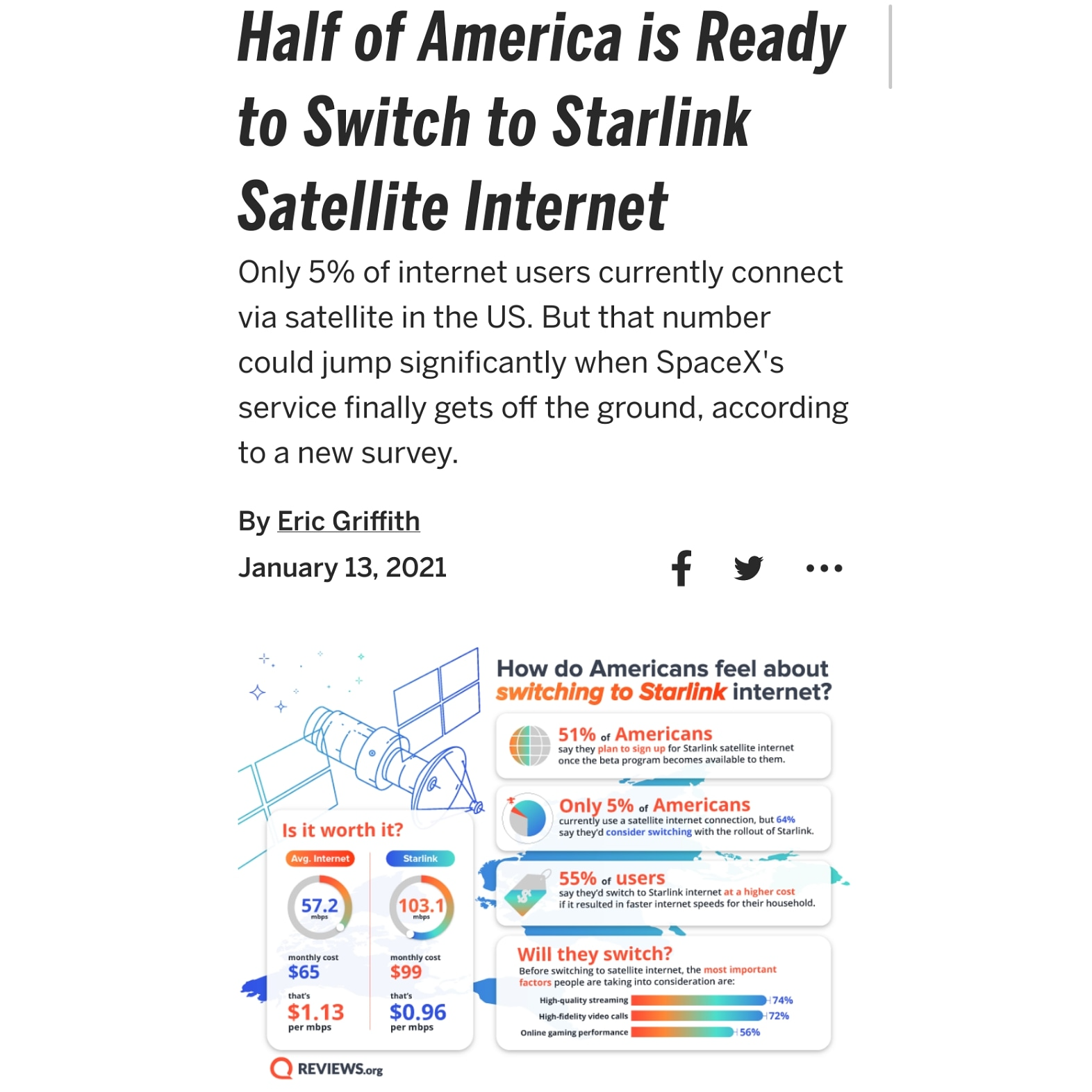 Only 5% of internet users currently connect
via satellite in the US. But that number
could jump significantly when SpaceX’s
service finally gets off the ground, according
to a new survey.

>Chances are good that you hate your internet provider,
even if your connection is fast. Now imagine your
provider can barely give you reasonable speed for your
distance-learning kids, your forced-to-work-from-home
partner, or yourself for classes, video meetings, and
streaming The Expanse. That’s the state of internet for
far too many, especially in rural areas, and the only
reasonable solution on the horizon is the promise of
truly fast connections via satellite. That’s coming,
thanks to Amazon’s eventual Project Kuiper (allegedly
with speeds up to 400Mbps) and SpaceX’s Starlink. The
latter is right around the corner from a real launch (we
hope) in 2021. More beta testing invites may even go out
this month.

Starlink buzz is strong enough that Reviews.org did a
survey of 500 people over age 18 to ask whether they’d
consider getting on board. Despite the cost ($499 for an
antenna and router, plus $99 a month), over half of those
surveyed said they’re ready to sign up for the beta
program, and 55% who don’t use satellite now would
stick with Starlink permanently if the connection speed
was faster—even if it was more expensive than what
they currently have. Forty-four of all
respondents would stick with Starlink if they could make
payments on the equipment rather than paying the $499
up front.

The average monthly internet price in the US is $65, so
Starlink is pricier in that sense. But broken down by price
per Mbps, Starlink comes out cheaper—SO.96 per Mbps
(currently averaging 104Mbps on downloads) versus
Sl .13 per Mbps for the competition, on average.

The average monthly internet price in the US is $65, so
Starlink is pricier in that sense. But broken down by price
per Mbps, Starlink comes out cheaper—SO.96 per Mbps
(currently averaging 104Mbps on downloads) versus
Sl. 13 per Mbps for the comgmition, on average.

FYI, Starlink’s speed eclipses other satellite internet
providers in a big way and also lowers latency
significantly. That means the quality of the connection is
going to be much closer to what you get with cable (but
not quite as good as fiber to the home). Current Starlink
latencv is averaninn milliseconds

What are Joe Biden’s dealings in Romania, invoked by Donald Trump’s lawyer?