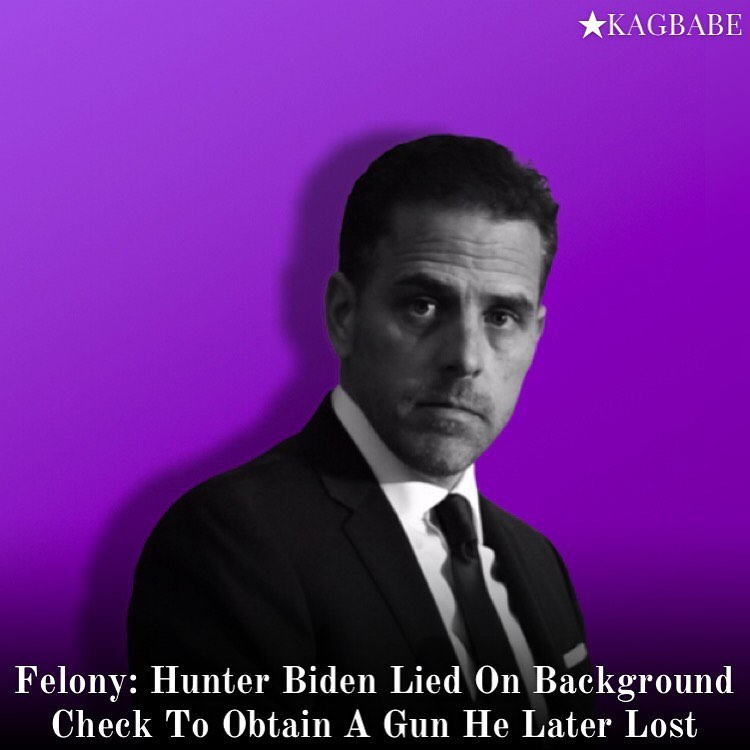 Hunter Biden lied about his history of abuse on a background check completed for the purpose of obtaining a firearm in Delaware. He later lost the firearm in a fight with his deceased brother’s widow, Hallie Biden, with whom he was in a relationship, according to Politico.

“Hunter responded ‘no’ to a question on the transaction record that asks, ‘Are you an unlawful user of, or addicted to, marijuana or any depressant, stimulant, narcotic drug, or any other controlled substance?’” reports Politico. The left wing website notes that this happened in 2018, only five years after Biden was ejected from the Navy after he tested positive for cocaine. Politico fails to note that 2018 was also the year Hunter Biden uploaded photos of himself with a crack pipe in his mouth that were later leaked to the New York Post, suggesting he was a current drug user. Politico also notes that lying on the form is a felony, though it is rarely prosecuted.

National File also released a redacted version of the diary of Ashley Biden, the sister of Hunter Biden, who wrote in 2019 that Hunter reminds her of drugs.

Politico describes the apparent fight with his then-girlfriend Hallie Biden that led to the firearm’s disappearance:

The incident began when Hallie searched Hunter’s pickup, which was parked at her home in Wilmington, because of unspecified “suspicions she had,” according to the Delaware State Police report. Inside the truck, she found a .38 revolver.

Hallie took the gun to Janssen’s Market, a nearby high-end grocery store where the Bidens are longtime regular customers. There, she tossed the gun, wrapped in a black shopping bag, into a trash bin outside of the store.

Later that day, Hallie informed Hunter of what she had done, and he instructed her to retrieve the gun, according to the police report. When Hallie returned to the grocery store, she found that the gun was missing from the garbage bin and reported the issue to the store. Police received calls from the store’s general manager, Paula Janssen, and from another person, according to the report.
⬇️

In Address on Inequality Amid Pandemic, Pope Calls on Global Community to Confront ‘Destructive Effects of Empire of Money’

In case you missed thisvia

Make no mistake, the Crime Crisis is the direct result of the revolving-door cri

She refused to do it on the spot. This is why Wendy is a patriot, next post is h