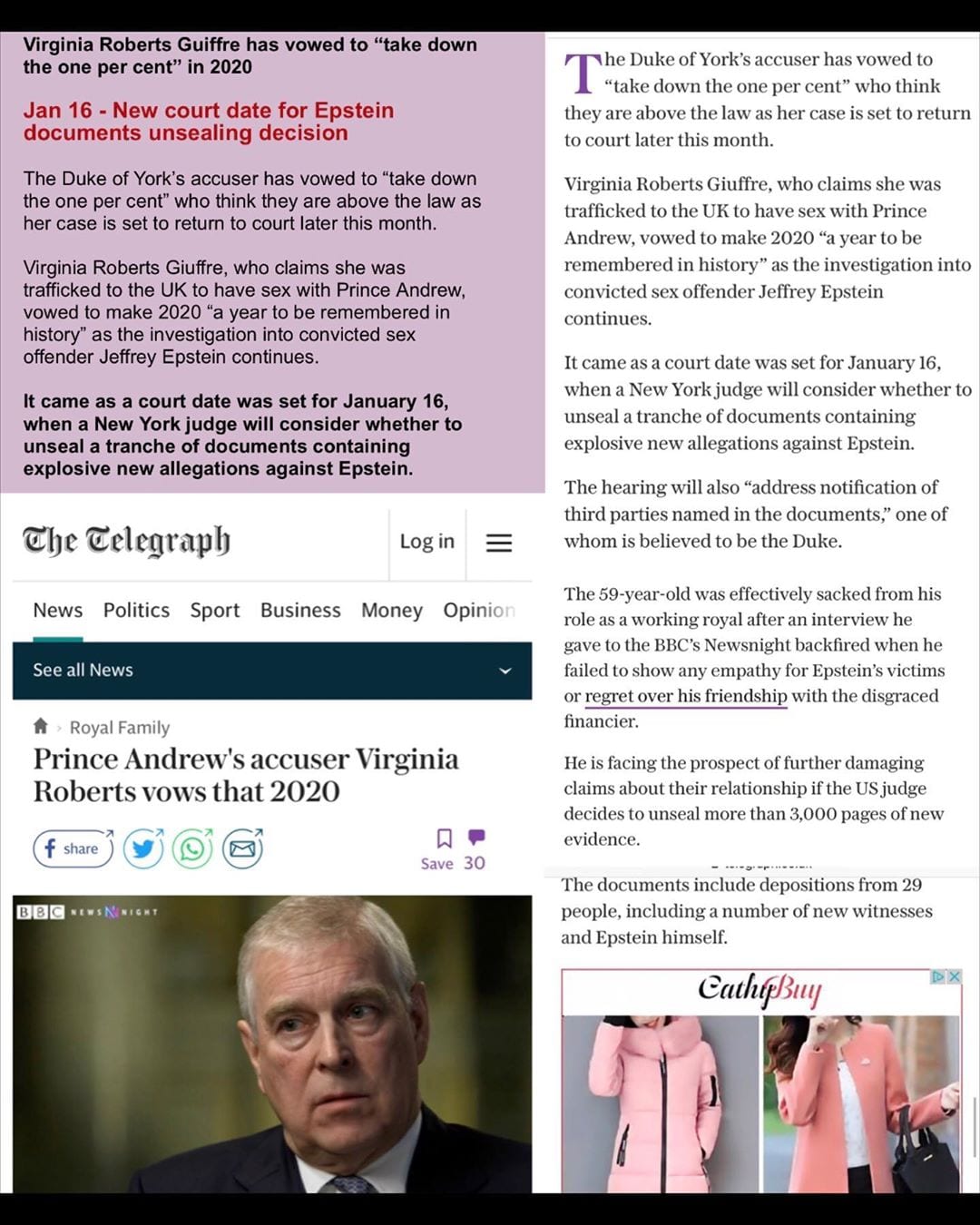 The Duke of York’s accuser has vowed to “take down the one percent” who think they are above the law as her case is set to return to court later this month.

Virginia Roberts Giuffre, who claims she was trafficked to the UK to have sex with Prince Andrew, vowed to make 2020 “a year to be remembered in history” as the investigation into convicted sex offender Jeffrey Epstein continues.

It came as a court date was set for January 16, when a New York judge will consider whether to unseal a tranche of documents containing explosive new allegations against Epstein.

The hearing will also “address notification of third parties named in the documents,” one of whom is believed to be the Duke.

The 59-year-old was effectively sacked from his role as a working royal after an interview he gave to the BBC’s Newsnight backfired when he failed to show any empathy for Epstein’s victims or regret over his friendship with the disgraced financier.

He is facing the prospect of further damaging claims about their relationship if the US judge decides to unseal more than 3,000 pages of new evidence.

The documents include depositions from 29 people, including a number of new witnesses and Epstein himself.

Jeffrey Epstein Drugged And Raped a 13-Year-Old Girl After Hiring Her As A “Babysitter” Then Used Her As “Fresh Meat” At “Intimate” Gatherings, New $100 Million Lawsuit Brought Forward By Two Women

Hundreds of people named in the documents were expected to have been formally notified by the end of last year to give them a chance to respond to the allegations.

The Duke’s name appears in the evidence along with a number of prominent politicians and businessmen, it is understood, although Buckingham Palace declined to comment when asked whether or not he had been contacted by the court.

The new evidence is part of a defamation lawsuit filed in 2015 by Ms Roberts Giuffre, against Epstein’s alleged former “madam” Ghislaine Maxwell, a British heiress.

Happy New Year to all the people in the world who want to see a change!! Let’s make 2020 a year to be remembered in history as the year we took down the 1% who thought they were above the law!! From Virginia & Robbie

Ms Maxwell has written a secret letter to the court in a bid to persuade the judge why the documents should remain sealed.

The letter has become the subject of its own legal argument in recent weeks as it remained sealed and was not disclosed to all relevant parties.

Lawyers for the Miami Herald, which is fighting for access to the court documents, said: “Such surreptitious filing is highly improper and illustrates Maxwell’s utter disregard for the public access issues at stake in this litigation.”

Ms Roberts Giuffre wrote on Twitter: “Happy New Year to all the people in the world who want to see a change!! Let’s make 2020 a year to be remembered in history as the year we took down the 1% who thought they were above the law.”

She has claimed repeatedly that she was trafficked by Epstein to have sex with the Duke when she was aged 17 at Ms Maxwell’s home in Belgravia.

The Duke categorically denied her allegation during his Newsnight interview, insisting it “simply didn’t happen” and that on the day in question he was at a Pizza Express in Woking.

New court date for Epstein document unsealing. Jan 16th
Virginia Roberts has vowed to “take down on the 1%.”
#TheGreatAwakening

plan is being executed and more importantly WHY it is being done this way.