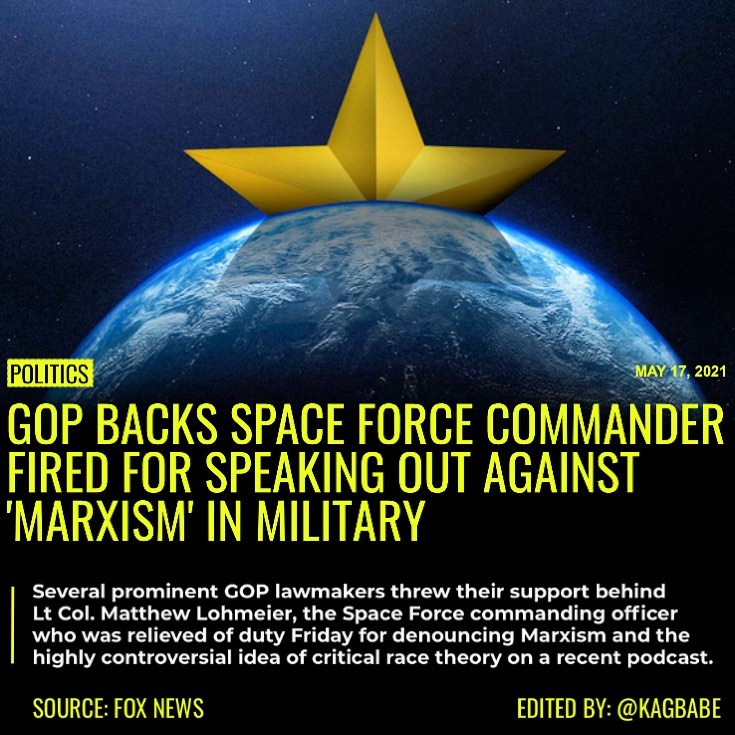 Republican lawmakers blasted President Biden online after the military removed a Space Force commanding officer for speaking out against critical race theory and Marxism in the military.

Several prominent GOP lawmakers threw their support behind Lt Col. Matthew Lohmeier, the Space Force commanding officer who was relieved of duty Friday for decrying Marxist ideologies and critical race theory, which he said are gaining influence in the military, on a recent podcast.

Rep. Dan Crenshaw, R-Texas — himself a former Navy SEAL — said the military needs to prepare service members for combat and told social media users to not let the story “slip away.”

“We need to be preparing our warriors to fight and win battles, not how to be SJWs,” Crenshaw wrote. “Far left critical race theory is taught while speaking out against MARXISM is punished??”

“Share this,” he added. “Don’t let this story slip away.”

Rep. Byron Donalds, R-Fla., dubbed Lohmeier a “hero” for both his military service to America and defending the rights of the “leftist mob” trying to cancel him.

“Lt. Col. Matthew Lohmeier is a hero, not only for putting on the uniform every day to defend our nation but also to defend the freedoms of the leftist mob attempting to cancel him,” Donalds said. “[Critical race theory] should have no place in our classrooms, Armed Forces, or country as a whole.”

Donalds’ fellow House member Rep. Andy Biggs, R-Ariz., echoed the Florida Republican’s sentiment of Lohmeier as a “hero,” writing the US military “should be preparing to win battles – not being brainwashed with Marxist ideals.”
⬇️

Ok, so I forgot a foreign country … transmitting from Mongolia! I kid you not.

@martingeddes Ceiling lights remind me of this.

Imagine that, the Cohen Group connected to China by making multi million dollar