Senate Republicans blocked the bipartisan $570 billion infrastructure deal Wednesday because the text of the legislation was not ready to study.

The 49-51 vote fell short of the 60 needed to advance a bill. Senate Minority Leader Chuck Schumer (D-NY) switched his vote to allow “him to bring it back up for a second vote” next week if he wishes.

“We have made significant progress and are close to a final agreement,” the bipartisan infrastructure group’s released statement read. “We appreciate our colleagues on both sides of the isle, and the administration, working with us to get this done for the American people.”

The statement released by the bipartisan infrastructure group did not contain Sens. Kevin Cramer (R-ND) and Jerry Cramer’s (R-KA) signature on it.

Sen. Mitt Romney (R-UT), an original bipartisan negotiator of the deal, said before the vote he believes “there’s an unanimous point of view that we shouldn’t vote on a motion to proceed until people know what the summary is of the bill.”

Schumer presumably attempted to rush the bill through the Senate as summer recess approaches amid two other crucial initiatives of raising the debt ceiling and passing the trojan horse $3.5 trillion infrastructure package. The former must occur before recess begins after August 6. Schumer said before the vote:

This vote is only the first step in the legislative process on the Senate floor. It is merely a vote about whether the Senate is ready to begin debating a bipartisan infrastructure bill. I have also been very clear about what this vote is not: This vote is not a deadline to have every final detail worked out. It is not an attempt to jam anyone.

“I think there will be another vote on this bill, or a shell, whichever it may be,” Sen. Jon Tester (D-MT) said after the vote. “I think we’ll work hard to get the thing across the finish line.” He added:

If the bill is not brought up again for a vote, it is unknown what the end result will be for the bipartisan infrastructure deal.

“That’s what is problematic,” said Sen. John Thune (R-SD), also after the vote.

“President Biden has said there’s no linkage here. You’re not going to force me or force us [Republicans] to sign both into law,” Thune said in reference to Democrat leadership that wants both packages signed into law on a two track system in order to champion bipartisanship and the success of signing radical polices into law.

“My hope is that by early August we will have a budget proposal to bring to the floor for a vote,” said Sanders.

Man With Rifle Gets Away After Firing At Deputy During Chase, Disabling Police SUV 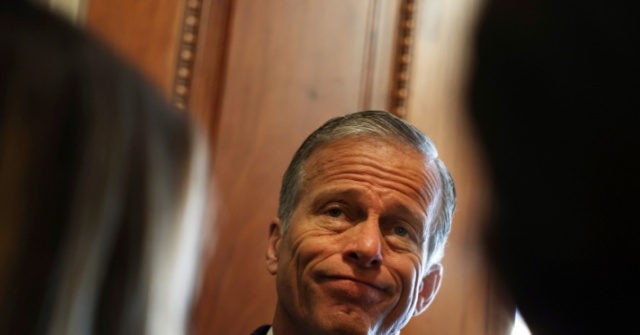