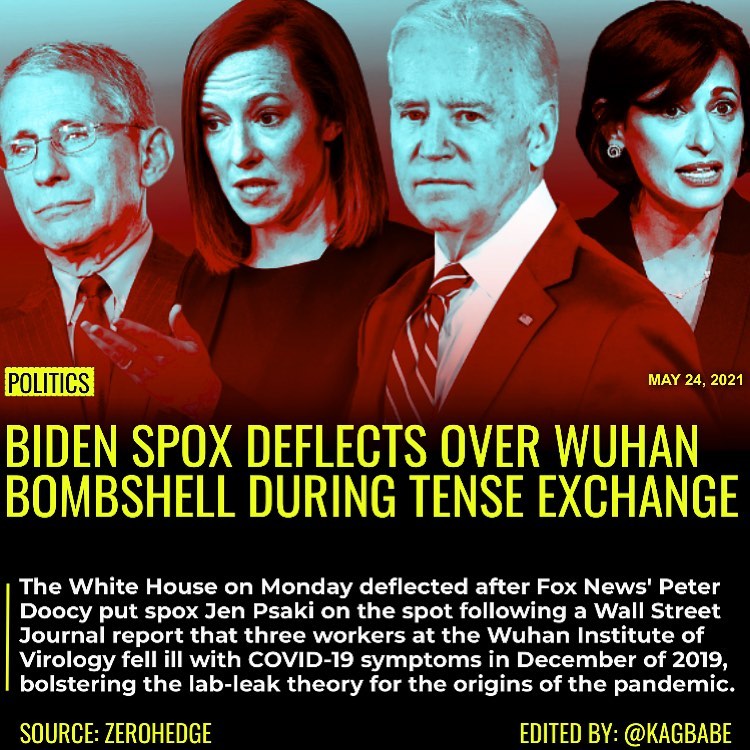 The White House on Monday deflected after Fox News’ Peter Doocy put spox Jen Psaki on the spot following a Wall Street Journal report that three workers at the Wuhan Institute of Virology fell ill with COVID-19 symptoms in December of 2019, bolstering the lab-leak theory for the origins of the pandemic.

“Why isn’t President Biden pushing for more access, more information to get to the bottom of exactly what happened,” asked Doocy.

“We are,” replied Psaki, adding “and we have repeatedly called for the WHO to support an expert-driven evaluation of the origins. During that first phase of the investigation there was not access to data, there was not information provided. And now we’re hopeful that WHO can move into a more transparent independent phase II investigation.”

Doocy shot back – “But with 589,920 dead Americans, at what point does President Biden say ‘we don’t want to wait for the WHO. We don’t know what they’re doing. This needs to be an American-led effort to get to the bottom of what happened.'”

“He talks all the time about how he’s known President Xi for a long time. So why can’t he just call and ask?”

Psaki: “You’re misunderstanding how this process works. An international investigation led by the WHO is something that we’ve actually been pressing for for several months, in coordination with a range of partners from around the world. We need that data, we need that information from the Chinese government. What we can’t do… is leaping ahead of an international process. We don’t have enough data to come to a conclusion at this time.”

Doocy: “So is there any amount of casualties from covid that would make you not want to wait for an international effort and just do it?”The White House has repeatedly resisted forming an opinion over the growing lab-leak hypothesis, insisting that it would wait for a ‘complete and independent investigation’ from the World Health Organization – the same WHO which conducted a laughable Wuhan roadshow months ago that concluded COVID-19 likely emerged via natural origin. And who was the most prominent member of said WHO ‘investigation’ by far?

Gooby pls they all shook Find your cozy

Talk about screaming into the void.

“Come out of her My People,” let Isaiah 63:3-4 happen to these people. Repost