What are you seeing? The “corona” is “spreading” to Congress
Why would that be significant?
Bc, IMO, The corona is being co opted as a WH cover for DS arrests
and deaths.

There are 221 confirmed cases in the US and there have been 12 deaths so far.

On Thursday night Tucker Carlson announced that there are reports that a congressional staffer has come down with the virus.

There were 63 new cases and 1 new death in the United States on Thursday, including at least:

– 1st case in Colorado [source]’
– 1 case in Middlesex County, Massachusetts
– fifth case in Illinois a person who returned from Italy. He’s in isolation at Rush. [source]’
– second case in New Jersey: a 32-year-old man from Fort Lee [source]’
– 2 cases in Harris County, Texas: both are travel-related [source]’
– 1 new death in King County (Washington state): a woman in her 90s
– a resident of Sonoma County (second case there) who traveled internationally on the Grand Princess ship from San Francisco to Mexico [source]
– 4 in Los Angeles County, California [source] – the 1st cases in San Francisco, California [source]’
– 11 in New York State: 3 are in serious condition and are treated in intensive care units [source] New cases include a man in his 40s and a woman in her 80s [source]
– the 1st case in Nevada [source] – 1 in Tennessee (Williamson County) [source] – a Facebook worker in Seattle [source] – the 1st case in New Jersey: a man in his 30s hospitalized in Bergen County [source]

Congress was warned on Wednesday that there was a possible coronavirus exposure at the AIPAC conference this year.

Congress was warned on that there was a possible
coronavirus exposure at the AIPAC conference this year.
thegatewaypundit.com/2020/03/breaki„
Do you SEEEEEEE it
Just see it. Please kek

Deep State Big Tech lending their names to the fake news panic push
to make it seem like #Coronavirus
is closing in. A scared public is like
putty in their hands. Why no reported infections in Harley Davidson or
MyPiIlow? Paleeze.

Google Amazon and now Facebook.
The Coronavirus has taken an odd liking to nursing homes and Big
Tech. twitter.com/tedIandkS/stat—.

I just landed at JFK after reporting on #coronavirus in
Milan and Lombardy —the epicenter of Italy’s
outbreak— for
@vicenews. I walked right through IJS
customs. They didn’t ask me where in Italy I went or if I
came into contact with sick people. They didn’t ask me
anything.

WATCH: “The best estimates now of the overall
mortality rate for COVID-19 is somewhere between
0.1% and 1%,” Adm. Brett Giroir, assistant secretary for
health at HHS, says. “That’s lower than you heard
probably in many reports it’s not likely in the range
of 2 to 3%”

(WASHINGTON) — President Donald Trump’s visit to the Centers for Disease Control and Prevention in Atlanta has been called off because of concerns that a staff member may have been infected by the coronavirus.

Trump told reporters Friday that concerns were raised Thursday about “one person who was potentially infected” who worked at the CDC. ”Because of the one person they didn’t want me going,” he added, explaining why a planned stop at the agency, which is working with state and local officials to help combat the spread of the new virus, was left off his schedule.

Trump said the person has since tested negative for the new virus. He said he still hopes to visit the agency.

COVID-19 so far has killed 12 people in the U.S., most of them in Washington state.

Trump had planned to sign an $8.3 billion coronavirus response funding bill at the CDC. Instead he signed it at the White House before his departure to travel to view tornado damage in Tennessee.

The White House said in a statement that Trump would no longer visit the agency because he “does not want to interfere with the CDC’s mission to protect the health and welfare of their people and the agency.”

AP Confirms: Democrats Are Lying To The Public About Coronavirus

Is anyone even a little shocked? Imagine how much worse it gets.

Pro-Trump Telegram channels and other online forums were filled today with posts from users angry and disappointed that Trump did not black out U.S. communications networks and send in the military to arrest Biden and other Democrats and celebrities.

Who is Les Wexner? 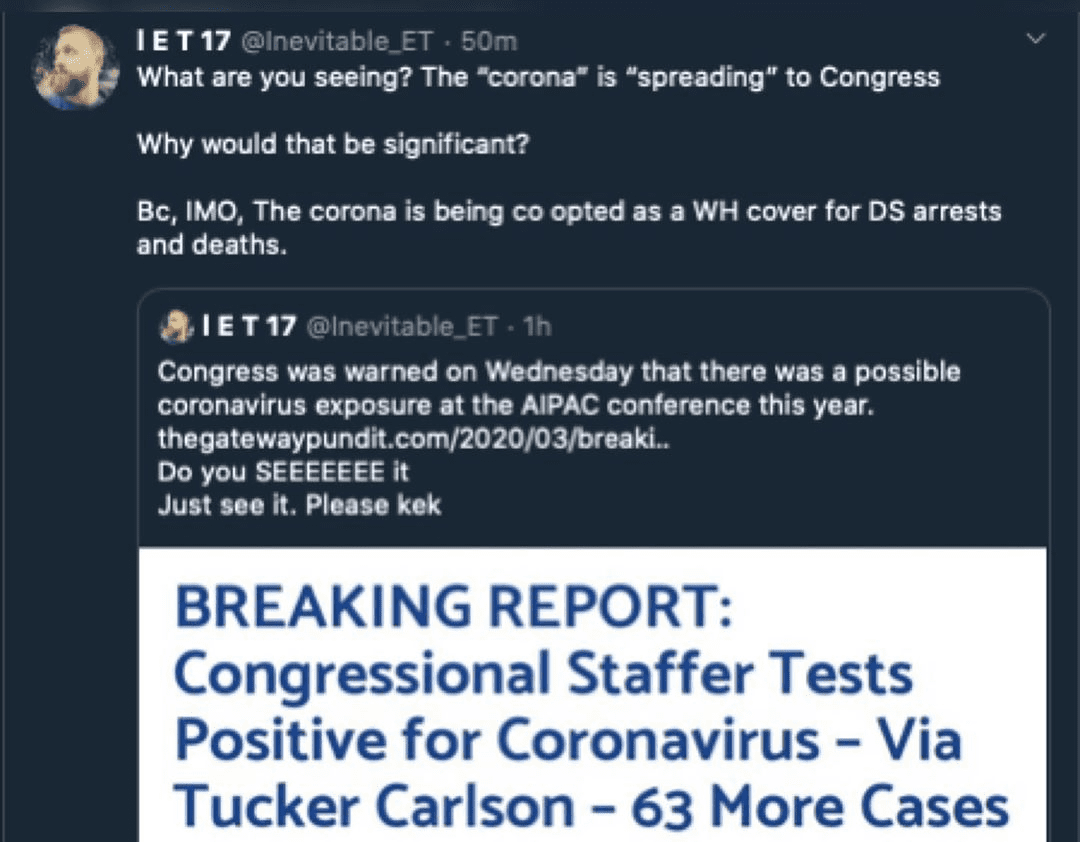